Royal Cosmetics, with the launch of the basic skincare product Royal Gold, an original pure gold cream, was founded in 1987. The company has always been known for its products containing gold flakes, which, since ancient times, have been highly sought after.

Since it’s founding, Royal Cosmetics has kept abreast of the latest research trends, and due to its ongoing research and development, has developed today’s products—known for being oil-free and containing no animal products or artificial fragrances and colors. Our gold cream products, with an annual production of over one million bottles, are loved by many, many users. As Japan’s premiere manufacturer and distributor of pure gold cosmetics, Royal Cosmetics continues to grow as a world-class corporation, one that continues to boast of top sales figures.

As one of Japan’s leading manufacturers of cosmetics, which incorporate pure gold and the blessings of nature, our aim is to deliver lasting beauty to all users through the top quality products we produce.

People all over the world are now seeking a more natural way of life and want animal-free, oil-free products that defy conventional wisdom about cosmetics. Royal Cosmetics takes these voices to heart, and focuses on the pursuit of natural beauty. To answer to the question, “What is beauty?”, we would say that it is the unique qualities that each person possesses as an individual.

We are convinced that the skin’s natural beauty, revitalized by top quality products, can move the hearts of women the world over. 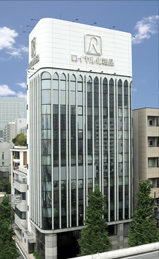 April 1987
Our company began with the creation of Royal Gold, our original pure gold cream, in the neighborhood of Naka-Kasai, Edogawa-ku, Tokyo.

April 1997
The EX Series was launched.